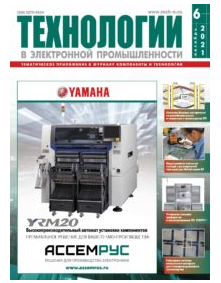 To carry out etching to a certain thickness, it is necessary to know the etching rate, which depends on the material being processed, the gas medium, pressure, plasma power, as well as time [3].

Based on the experiments carried out, graphs of the dependence of the etching rate on time V(t) and the film thickness on time h(t), as well as the relative change in the frequency of quartz resonators on time δ(t) are plotted, shown in Fig. 1, 2, respectively.
chart with tatya.PNG
Graph of the dependence of the relative frequency change of quartz resonators on time

The experimental data showed that over time the etching rate of the copper film decreases, and during the repeated processing of the same quartz resonator with the same processing mode, the etching of the film does not occur. The maximum etching speed is 2.72 nm/min. Etching of the AL2O3 film occurs only at a time interval of 1-1.5 min and more than 2 min. At the interval of 1.5–2 min, the mass of the quartz resonator increases, which is associated with the oxidation process of Al.
The dependence of the relative frequency change on time δ(t) is similar to the dependence of thickness on time h(t). Minimal changes occurred for copper at 1.5 min. In the case of Al2O3, the graph δ(t) has negative values, which also indicates that the etching process does not occur at this interval.

Link to the article in the journal: https://tech-e.ru/mrs.php